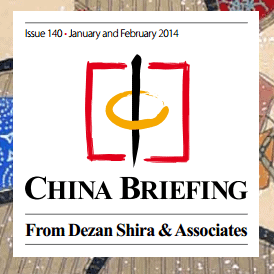 This detailed guide was developed by LEA Global firm member Dezan Shira & Associates and this issue covers the:

January and February are always busy times for company administration in China, with annual license renewals and updates to file, together with procedures for preparing your annual audited accounts for 2013. The past year might have been a turning point for China. After the smooth leadership transition that took place at the beginning of 2013, the new cabinet led by President Xi Jinping and Premier Li Keqiang has been trying to play the role of reformers by further opening up the Chinese market and bringing more foreign investments into China. Thousands of administrative regulations were abolished by the State Council. Further, in November 2013, the Third Plenary Session of the 18th Central Committee of the Communist Party of China (CPC) revealed a series of comprehensive reforms which will be pushed in the following decade. It is important for existing and potential investors to be aware of these ongoing changes.

This China Briefing issue will discuss annual compliance requirements for foreign-invested enterprises, including wholly-foreign owned enterprises, joint ventures and foreign-invested commercial enterprises, as well as the less demanding requirements for representative offices. Tax compliance is especially important because an FIE can only repatriate profits to foreign investors after the Chinese tax bureaus are satisfied that all applicable taxes have been paid up. We will also highlight the key tax and legal changes that will significantly influence the way companies do business in China in 2014.

This magazine was originally published by China Briefing.