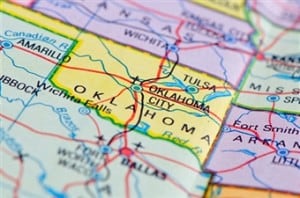 For corporations (not LLCs) that have nexus and file in Oklahoma, the new franchise tax forms have been finalized.

In 2012, Oklahoma had a tax called the BAT (business activity tax). For 2013, the BAT was replaced with an Oklahoma Franchise tax.

The new franchise is applicable for the 2013 tax year and is due September 15, 2014 even if the form was not available in March or April 2014 when federal returns were prepared. The franchise tax Form OK 200 was not finalized until June 2014 and was originally due July 1, 2014; however taxpayers have until September 15, 2014 to report and pay the tax. Based on our discussions with Oklahoma, they have indicated that penalties and interest will not be assessed regardless if the return was extended provided Form OK 200 is filed by September 15, 2014.

Taxpayers also have the option to file Form 200-F to change the franchise tax filing period to align with its year end. The instructions state that this form is due no later than July 1, 2014, but Oklahoma has indicated that this form can be filed by September 15, 2014. The filing of this form will change the due date for next year to coincide with the corporation income tax return due date.

BEWARE: There are probably a few corporations that need to go back and file this form before September 15, 2014, if the company files in Oklahoma and the returns were filed before June 2014. There is a $100 minimum registered agent fee due with the form. You also want to look at filing the Form 200-F which changes the due date of this form to coincide with the due date of the corporate income tax return to make sure the July 15, 2014 due date is not missed.

Kay serves several of Keiter’s larger corporate clients with their FAS 109 tax provision and returns. Currently, Kay leads the Keiter multi-state tax team, which is primarily responsible for a majority of the multi-state tax filings prepared by the firm. In addition, the Keiter multi-state tax team provides income, as well as, sales and use audit and research support services. Kay works on a wide variety of industries, since most of her clients are multi-state. Some of the specific industries she serves include services, broker-dealers, manufacturing, and construction. Furthermore she consults with a variety of clients on filing requirements for multi states and foreign company ownership and operations.