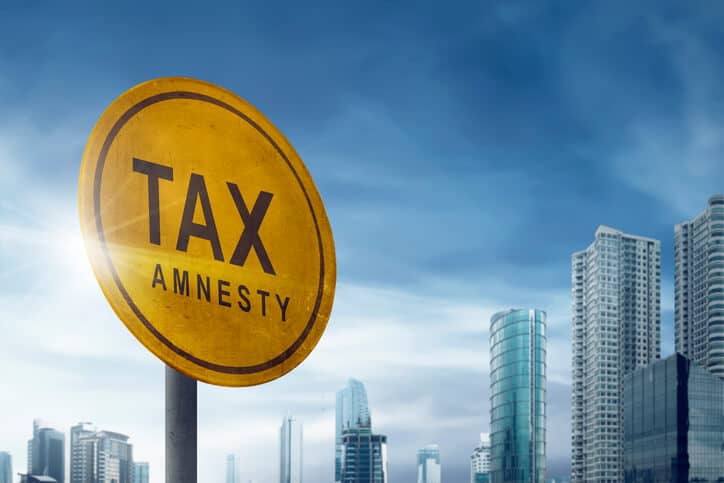 Last week, legislation creating a Tax Amnesty Program in Virginia passed the General Assembly and was signed by the Governor.

The Amnesty Program will cover taxes administered by the Department of Taxation (income, sales/use, litter, communications sales tax, etc.) and will last for a period of 60 to 75 days.  No dates have been set yet but the legislation provides the program will be during Fiscal Year 2018, which means it will between July 1, 2017 and June 30, 2018.  Previous amnesty programs have run in the September to December time frame.

The Department of Taxation will be issuing guidelines on the details of the program, however, below we highlight some of the key provisions of the legislation:

What are the benefits?

In most situations, penalties and one-half of the interest that is due will be waived upon payment of the remaining balance for taxpayers that come forward and pay outstanding liabilities due.  Installment payment plans likely will not be allowed thus taxpayers must be able to pay to qualify for amnesty.

All taxpayers (except those listed below) potentially could benefit.  Any taxpayer who currently has an outstanding assessment, has not filed a return, or has under reported taxes due, for any tax administered by the Department of Taxation may apply for amnesty.

Who will not benefit?

The following taxpayers will not be eligible to participate:

What happens to those who do not participate but who have tax liabilities?

At the conclusion of the amnesty period, any remaining amnesty-qualified liabilities will be assessed a 20% penalty.  With prior amnesty programs, the Department of Taxation has assessed this 20% penalty on taxpayers with liabilities identified through audits. Thus, if a taxpayer is audited two years after the conclusion of the program and found to owe tax for the amnesty-eligible period, that taxpayer will be assessed a 20% penalty on the tax due.

We encourage taxpayers to review their compliance efforts to determine if participation in the program would be advantageous to them.  If they have under reported the tax, have adjustments (liabilities due) for prior years, have failed to file returns, or otherwise not been in compliance with the tax laws, the tax amnesty period will be a good time to get this straightened out.

Additional information will be provided regarding the Virginia Tax Amnesty Program once guidelines are established by the Department of Taxation.

Pennsylvania will be offering a tax amnesty period from April 21, 2017 to June 19, 2017.  The Department of Revenue will waive all penalties and half of the interest for anyone who participates in Amnesty.  Taxes administered by the Department of Revenue are eligible for the program.  Eligible periods are those where a delinquency exits as of 12/31/2015.  Taxpayer who are eligible to participate but do not will be assessed a five percent nonparticipation penalty and may be subject to other enforcement actions.  Like Virginia, there are certain types of taxpayers who may not participate in the program.  For more information on this see http://www.revenue.pa.gov/taxamnesty/Documents/tax_amnesty_qa.pdf.

South Carolina has enacted legislation authorizing the Department of Revenue to create a tax amnesty period during which some of all penalties and interest may be waived.  The details about this are not yet available.