Home > Insights > What is Going on in Manufacturing? 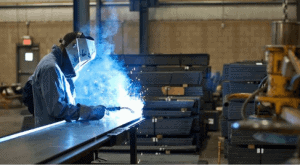 2013 was a good year as a whole for manufacturers in the United States. While a large contingent of major manufacturers have been reporting revenue growth and optimism since 2011, The Institute for Supply Management’s manufacturing index, which monitors national economic conditions for manufacturers, reported six consecutive months of growth to wrap up 2013. Looking into 2014 and beyond, there are several key issues facing the manufacturing industry which are likely to only increase in importance and notoriety from here on out. This article highlights four industry trends which will help shape the future for many of our clients and the industry to which they belong.

As manufacturing continues to grow, a major concern for industry players is the lack of a qualified labor force needed to keep up the momentum.  Many manufacturing jobs have traditionally been filled by baby-boomer era employees, the first of which are now reaching the 65+ typical retirement age.  There are concerns that retirement rates have and will continue to outpace the   level at which manufacturers are able to find qualified replacements.  However it is more than just a numbers game. As the manufacturing industry has evolved, so have the qualifications and skills required of employees to be successful.  No longer do manufacturing jobs consist simply of standing in line, doing the same thing, day after day – a cornerstone of the blue-collar factory era.  Manufacturing processes are becoming highly technical and complex and require employees to think critically and be proficient in science, math, and technology, rather than simply supplying physical labor. It will be a challenge for employers to change the widespread perception of what a manufacturing job entails and find ways to develop the necessary skills while creating an interest in the manufacturing industry, especially with school-age children who will be entering the work force in a few years.

According to a CNBC article that came out in June 2013, the demand for “Made in America” products is on the rise not just because of “economic patriotism” but because it is becoming better and better for companies’ bottom lines.  While a mass repatriation is extreme, many manufacturers are exploring shifting some operations back to the U.S. for several reasons, most notably rising labor costs overseas; concerns over product quality control, supply chain management, currency fluctuation, political volatility, and workplace safety; a desire to simplify logistics and be closer to target markets; and improving research and development efforts. Consumer behavior is also influencing a shift back to manufacturing in the U.S. A survey from the Boston Consulting Group recently reported survey results showing that 80 percent of U.S. consumers would pay more for a “Made in USA” label than they would for products labeled “Made in China.”

30 printing, also called “additive manufacturing” has been gaining momentum for a while now and is poised to take off big-time in the years ahead. The Economist has called it a catalyst of “the third industrial revolution.” While typically 30 printing has been thought to be better suited for low-volume production and  prototype development, large manufacturers will be looking to 30 printers in the manufacturing of  products and components across a wide range of industries. Major companies such as Nike, Siemens, and General Electric have said that 30 printing will play a significant role in their manufacturing operations going forward.  30 printing is also getting cheaper as its use becomes more and more popular. It is thought that 30 printing has an endless array of possibilities and uses, especially for smaller manufacturers that make custom   products on demand.  As 30 printing gains in popularity, there will be an opportunity for specialized manufacturers to make both old and new products in ways that will maximize efficiency and quality control. It will be a challenge though for manufacturers to find qualified workers who have the skills and knowledge to operate in a highly-complex setting led by 30 printing. There will be a real opportunity for entrepreneurs who are willing to master this new technology before it becomes mainstream.

Automated technologies and communications will be critical to manufacturers who expect to compete in an ever-evolving industry. It is already proven that robots and specialized machinery add significant advantages in quality control, cost reduction, reliability, and efficiency when used correctly. Going forward though, companies will look to the “industrial internet” to further the capabilities of automated operations.  A network of sensors, internet connections, and physical   tools   allows for real-time communication between operators, products, and   equipment. General Electric has estimated that the industrial internet will add $10-$15 trillion to global GDP. The implications of this on supply chain management, minimizing downtime, and troubleshooting are endless.  As a result though, companies will be faced with an enormous amount of data which will require qualified engineers and data analysts who can manage data and react in real-time when action is required. These networks can also allow plant operators to manage and control operations from remote locations, minimizing the need for them to be physically in the buildings in which they run. Again, this is just another example of why manufacturers will need to find qualified people to work in a “smart” manufacturing process, since the classic factory model of assembly lines and intensive labor is quickly diminishing.